Did you know the relationships you nurture in your everyday life can help you live longer?

It’s not only romantic relationships or family relationships. It’s also the interactions you have with an old school friend, a co-worker, or the people in your neighborhood, to quote Fred Rogers.

Research from numerous experts shows that when octogenarians, and even centenarians, look back on their lives, the determining factor in their longevity and enjoyment of life has been the quality of their interactions with others.

Strong relationships and high amounts of social interaction have kept them not only healthy, but happy.

What the research says

In a 2015 TEDx talk, psychiatrist Robert J. Waldinger, the current director of the Harvard Study of Adult Development, shared that it is not wealth or fame, but good relationships that keep us happier and healthier.

A Harvard study tracked the lives of 724 men over 75 years. When the study started, some of the participants were sophomores at Harvard College. Others were young men from lower income areas near Boston, who lived in tenements and had poor access to food and water. The study checked in over time on their home lives, professional lives, friendships, and mental health. Their overall well-being was assessed using interviews, brain scans, and family feedback.

Overwhelmingly, the study found that the biggest predictor of health, happiness and longevity amongst the participants was strong social connections. Those with good relationships with their spouses and families fared well. The happiest retirees were those who had filled the space previously occupied by workmate companions with new relationships in their golden years.

What about women? In a 2017 TED talk, psychologist Susan Pinker,  author of The Village Effect: How Face-to-Face Contact can make us Healthier, Happier and Smarter, highlighted research that encompasses both men and women. It found that high levels of social engagement, and the quality of those interactions, led to longer lives across genders.

Pinker noted that in the developed world, women actually tend to live 6-8 years longer than men, because women are more likely to prioritize and maintain in-person friendships. Their interactions create a biological forcefield against disease and decline. The magic number seems to be three stable relationships. Pinker highlighted that people can hold off dementia for longer if they are more socially engaged, and women with breast cancer are four times as likely to survive if they have a strong group of friends helping them through troubled times.

While women generally seem to live longer than men, in Sardinia, Italy, Pinker found there was a blue zone where people live longer that challenges the trend. In the village of Villagrande, men and women seem to enjoy equal amounts of longevity. Villagrande has six times as many centenarians as mainland Italy and ten times as many centenarians as North America. Why? According to Pinker 25% of it can be attributed to genetics. But the other 75% is attributable to lifestyle — and it’s not the frequent exercise, positive-thinking, gluten-free lifestyle options you might assume are  responsible for longevity.

Social cohesion defined Villagrande’s original design centuries ago. The village was defined by densely populated spaces where people dwelled close together for protection. Some of the Sardinian centenarians interviewed in the study had survived two world wars and lived through grim conditions. However, they were always surrounded by extended family and community members. They chatted frequently with their neighbors, their priest, their grocer and other townspeople. Their closeness with others boosted their health and well-being.

How does being social improve our longevity?

Pinker points to a study by Julianne Holt-Lunstad of Brigham Young University that researched every aspect of lifestyle for a group of middle-aged people, including diet, and lifestyle habits such as exercising, whether they smoked or not, and more. What reduced their chances of dying the most? Close relationships and social integration were the two biggest predictors. 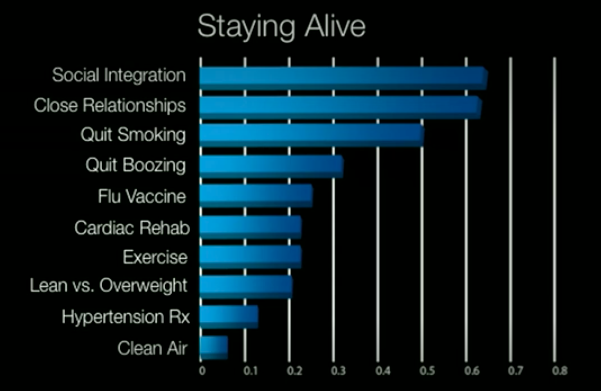 It turns out that the depth of your relationships are important, but how many people you talk to on a given day, both weak and strong connections, is just as important, if not more so. Whether it’s talking to family members and co-workers, chatting with your barista, or even engaging with someone next to you in line, every social interaction helps feed your well-being.

You may text or comment on friends’ Facebook posts a lot and interact with them online, but research shows that digital interactions are not the same as in-person encounters and do not provide the same health benefits. Neuroscientist, Elizabeth Redcay, of the University of Maryland, has looked at brain function and what happens when you see someone live and in person versus seeing them in content online (for example, on YouTube). She found that the areas of the brain associated with attention, social intelligence and emotional reward become much more engaged when interacting with someone in person.

Today, social isolation is purported to be the public health risk of our time. A 2014 review of dozens of studies published in the journal Social and Personality Psychology Compass indicates that loneliness can inhibit mental function, sleep and well-being, which can, in turn, contribute to the risk of illness, shorter lifespan and death.

So how can we improve our social interactions and boost longevity?

At the most basic level, you can focus on in-person interactions and the quality of your relationships.

As you build more face-to-face interactions into your day-to-day routine, you will develop a  “village” that boosts your immune system and brain health, and promotes your longevity. And that social interaction will stand you in good stead as you journey through life.

Multi-Tasking Dads, This One’s For You
A Financial Take on Life Insurance from Ladder CEO Jamie Hale